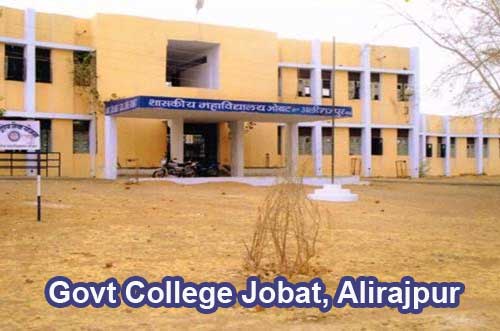 The Government College in Jobat is traced to Jobat town that comes in the Alirajpur district of the Madhya Pradesh state of India. Established in the year 1982, the Jobat Government College is governed by the Higher Education Department of the Madhya Pradesh government. Initially, the college was offering only courses in the Arts and Commerce fields. However, from the year 2008 onwards, the college started conducting courses in the Science stream too. The medium of instruction at the college is Hindi. Also, the college staff is trained to strike a balance between academics and extra-curricular activities for the all-round development of the pupils.

The Government College of Jobat has affiliation with the Devi Ahilya Vishwavidyalaya that is traced to Indore, a city in Madhya Pradesh. Additionally, the University Grants Commission has approved the college.

The population of Jobat comprises primarily of tribals. The Jobat Government college was started to provide quality education to the tribal populace who reside in the adjoining districts of Jobat.

The Government College of Jobat offers 3-year, undergraduate-level programs in the Commerce, Science, and Arts streams. Candidates can apply for the Bachelor of Arts (BA), Bachelor of Commerce (BCom), and Bachelor of Science (BSc) courses at the college.

The Government College of Jobat has a campus that is spread over 12 acres of land. Common rooms sports complexes, and laboratories are some of the facilities that the students can avail at the college campus.

Additionally, the college campus houses a library that is equipped with books and other reference material.